The legendary bluesman David “Honeyboy” Edwards received a lifetime achievement award at last night’s Grammy Awards ceremonies. One of the last of the first generation bluesmen, Honeyboy was a close pal of Robert Johnson and a contemporary of Charley Patton and other blues pioneers.

The 94-year-old Honeyboy was instrumental in establishing a unique American voice, one that was born of slavery and struggle, spirit and magic. It’s a rich history that begat rock and roll and even rap. Artists from Bob Dylan and the Rolling Stones to Jay Z emanate from those underpinnings, and many more contemporary artists have paid homage to this field of music from which they came.

If the blues seems like a quaint, dusty, irrelevant music genre, give a listen to Howlin’ Wolf, Muddy Waters, Johnson and Honeyboy. Listen long in the dark with your eyes closed and go on a journey to the center of the American music universe. And when you turn the lights on, read a copy of the late Robert Palmer’s “Deep Blues,” a thorough primer on the music and its handprints on American culture. 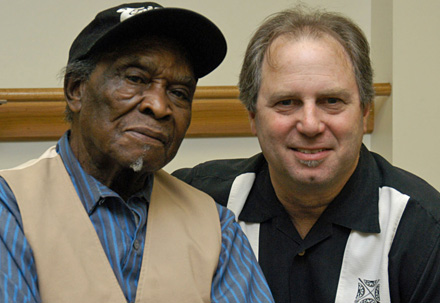 I got a chance to talk with Honeyboy after one of the many blues concerts I’ve promoted over the years that have included the likes of Buddy Guy, Koko Taylor, James Cotton, Earl King, Little Milton, Odetta, Pinetop Perkins, Hubert Sumlin, Willie “Big Eyes” Smith and Clarence “Gatemouth” Brown. Honeyboy was as charming as he was informative, happy to tell stories of Johnson and the early days. I considered it an honor and was pleased to see this giant of American music recognized last night.