I just saw the exhibit “Robert Frank’s ‘The Americans’” — centered on the photographer’s seminal book by the same name  — on display at the Metropolitan Museum of Art, New York, through Jan. 3.

Born in 1924 in Zurich, Switzerland, Frank took pictures in Europe and South America during his early career, but it wasn’t until he crisscrossed the seductive roads of America that Frank felt he was finally making art with his lens. With his U.S. travels in the mid-1950s, his work reached a new level, and 83 of his road images were arranged into the book “The Americans.”

It’s no surprised that Jack Kerouac wrote the introduction to the first U.S. edition of “The Americans (1959).” It raised eyebrows in the media for its brute black and white candor. But “The Americans,” like Kerouac’s own masterwork, “On the Road,” opened the door to the loneness of the country’s heart and spirit and, together, they inspired a generation of artists, musicians and thinkers. 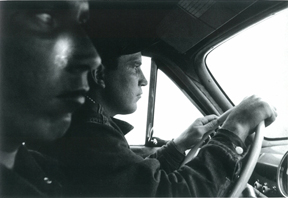 It’s interesting how foreign image makers like Frank, Mechelangelo Antonioni (“Zabriskie Point,” 1970), Louis Malle (“Atlantic City,” 1980) are able to capture the essence of the land better than most native auteurs. In fact, with the stir made by “The Americans,” Frank was compared to America’s original outsider observer, Alexis de Tocqueville, whose 1835 book “Democracy in America” helped to define the young nation’s unique character (Is it what America brings to you or what you bring to her?).

I believe a great artist is a conduit for “place.” His subject somehow finds him, speaks through him. The artist ultimately “sees” through time as the French photographer Eugène Atget described it. I believe such artists also see through other dimensions, some of which elude us, some of which speak through intersections of light and shadow, artifact and art, quietude and cacophony, moment and mystery.

It’s hard to describe “The Americans.” Language could illuminate it, could degrade it. Perhaps it’s like the stuff of dreams, the magic of which begins to disappear upon transfer to the conscious mind. So much spills from the bucket on its ascent from that deep, dark well.

But I try. Actually, I thought poetry might somehow have a special access pass to the world within photography. So I offer up the following images from my forthcoming chapbook “America, I’ll Have My Way With You”:

I MISS YOU ALREADY AMERICA

I miss you already America
and you’re not even gone

You might view the video of my song “Miss America,” too.

I was surprised and pleased to see Frank himself link the worlds of photography and poetry in his description of his work:

When people look at my pictures I want them to feel the way they do when they want to read a line of a poem twice.